Hitchhiking is one of those things that seems more like a Hollywood fantasy rather than a viable means of transportation. Back in the ‘70s maybe—but these days we quiver at the the thought of talking to strangers, much less riding in the car with one. In other areas of the world, that isn’t the case. In several countries, Hitchhiking is a much more accepted practice and is largely considered to be safe. While in New Zealand, renowned as one of the most hitchhiker-friendly countries in the world, I decided to try my luck at this 20th century pastime.

The goal was to go from Dunedin to Queenstown, a 282 kilometer (176 mile) trip. Under normal circumstances, it would take about 3.5 hours. My friend dropped me off at a strategic location near the entrance to the freeway heading out of Dunedin around 8:00 AM. I had made a sizable cardboard sign the night before that read, “Queenstown, please!” and did my best to look nothing like an ax-murderer. I had been reassured by many kiwi friends that I should have no problem finding a ride. I assumed it wouldn’t be too much harder than catching a city bus and that I would likely find someone within an hour or so headed non-stop to Queenstown.

I waited for about an hour as hundreds of drivers passed by and several more parked and skirted around me to head into work. I had a few glimmers of hope—one truck flashed his lights and put on his turn signal, only to drive right past me and turn at the next street. I started to lose hope and began to think of a backup plan. It didn’t help that it was quite chilly that morning for late summer—probably about 50 degrees Fahrenheit. I was only a few miles outside the city center, and could still walk back to my friend’s house or a bus station. I started to enter a daze when suddenly I heard a whistle from the gas station across the street. I looked over and a man (seemingly begrudgingly) waved me over to his car, an hour and forty-five minutes after I was dropped off.

I immediately jumped up and crossed the street in a hurry. I figured that I had done it—next stop Queenstown. The man was probably 60 years old, skinny and with just a little bit of grey hair left. He was dressed well and drove a brand new midsize SUV. He easily passed the eye test. Unfortunately, he informed me he was heading nowhere near Queenstown, but could get me to the intersection of the main highway that leads in that direction. I weighed my options, knowing that if I took the ride, I was committed and would be well out of walking or city bus range from my friends.

I decided to go for it.

We began driving down the highway and chatting. I wanted to make sure I was a good passenger so I put in an effort to be extra friendly and positive. It turns out that this man had hitchhiked his way through Europe back in the ‘70s for months. He understood what it was like to wait hours for rides. He gave me some pointers and asked me about hitchhiking in the US. After a short forty minute drive, he dropped me at the intersection of Highway 1 and Highway 8. I thanked him and was on my way.

It seemed like an ideal location, but it was far from easy to get my next ride. It was a rural area. There were fields, a nice warm sun, and sheep—lots of sheep. I waited for two hours with my curious companions bahhhing every few minutes to remind me just how far away from civilization I was. I started to think of backup plans. There was a gas station maybe 5 miles back…I could probably have walked there, but then what?

I saw an old couple slow down and start to pull over—my heart leaped. I started to get up and grab my bag just to see them wave their hands and speed away (apparently they just made a wrong turn and were doubling back). Just when I had lost all hope, a dark Alfa Romeo 159ti sped around the corner and stopped before I even realized what was going on. The driver rolled down his window and I immediately asked him where he was heading before realizing he was on the phone. I stood there unsure of what to do (he was blocking the road and surely didn’t want to wait around). Eventually he got off the phone and informed me that he was only heading a few towns up the road but I was welcome to join him if I wasn’t scared of driving fast. I figured it was a step in the right direction, so I hopped in.

He was a businessman in his mid 40s who had travelled to over sixty countries. He drove this route daily to his office in Lawrence and was very comfortable with the winding road. The landscape changed from green coastal plains to arid rock and hills in the blink of an eye. We barreled down the road—quickly, but in control. He was clearly a skilled driver and his car gripped the road effortlessly. After 30 minutes, we arrived in Lawrence, a tiny old town of just one main street. Interestingly, it was a growing business center, boasting free Wifi throughout the entire town (I guess that’s one of the reasons why he decided to establish his business there).

By this time it was well past noon and I hadn’t even made it 100 kilometers. I decided to get some lunch and decide what to do. My first rides had taken hours to find and I really wanted to get to Queenstown that day (I only had three full days scheduled there). I knew there was a bus that was coming through at three o’clock. The twist was that you had to purchase tickets in advance and the bus left from its origin city at two o’clock, meaning I had to make a decision fast on whether or not to use the free Wifi to book the ticket or keep hitchhiking. As I waited for a ride in a perfect pickup spot, I decided that if I didn’t have a ride by two thirty, I would try to book the bus and hope it wasn’t too late. That gave me just over thirty minutes to catch a ride.

Just when it looked like my hitchhiking adventure might come to a close, a Subaru wagon pulled over. It was a twenty-something year old girl—clearly an adventurous person. She wore a cast and a beanie with ski stickers all over the back of her car. Perfect. She offered to take me as far as Cromwell, a significant chunk of the remaining trip, and not a bad spot to get stuck. I gladly accepted.

We immediately hit it off and had no shortage of conversation topics. She was heading back from Dunedin where she had a doctor’s appointment for her broken arm. We talked about hitchhiking and Queenstown/Wanaka (my two destinations for the week). Eventually, my interest in wakeboarding came up. She immediately got excited and started talking about wakeboarding and snow skiing/boarding. It turns out that not only was she a ski enthusiast, but was also close friends with several top skiers, such as Jussi Wells. Just when I think it can’t get much cooler, she casually mentions that she herself was an Olympic skier in the 2006 Torino Olympics. Hitchhiking with Olympian—Crazy.

As we approached Cromwell, she insisted that we pull over so I could take a cheesy tourist picture with the giant fruit. She was really excited about this giant fruit. I gladly conceded and we pulled over. After a few shots with the fruit (and my new favorite hitchhiking acquaintance) we hopped back in the car to continue to my drop off spot.

At this point, I feel terrible. She wouldn’t have pulled over if I weren’t there and she had places to be. She was a very relaxed and carefree person, but I could tell she was uneasy. Who would want to be stuck with a random hitchhiker for hours waiting for roadside assistance? I knew I needed to do something. I tried all of the stupid fixes in the car (jiggle the gear shifter to make sure it was in park, etc.) Nothing. I figured I would try one more thing that had gotten me before, so I popped the hood and checked the battery cables. They seemed tight but I gave them a nice jiggle to be sure.

The car started right up and she beamed with happiness. I could feel the relief rush over both of us.

She bid me farewell a few minutes later, just forty minutes outside of Queenstown. It was getting late in the afternoon, but Queenstown was in sight. I once again made my way to the side of the road, prepared for the upcoming wait, but with a renewed energy from a great ride. I was shocked when a car pulled over within five minutes.

It was an old couple, not who I had expected. The first three rides were each some sort of traveler, adventurer, or ex-hitchiker. This couple never gave me this impression. They were originally from Greece but had been living in Queenstown for 50 years. The husband pointed out all sorts of points of interest as we passed by, including a great overview of the Central Otago vineyards around us (the Queenstown area is famous for Pinot Noir). Before I knew it, they were dropping me off at the outskirts of Queenstown. I made it.

I arrived at around 6 o’clock. The three and a half hour journey had taken me the better part of the day, about 9 hours, but I’ll remember the experience forever. While hitchhiking may not be the most practical means of transportation, it can work. It’s a unique experience that proves not everyone in the world is so evil.

The route with each of the pickup spots marked 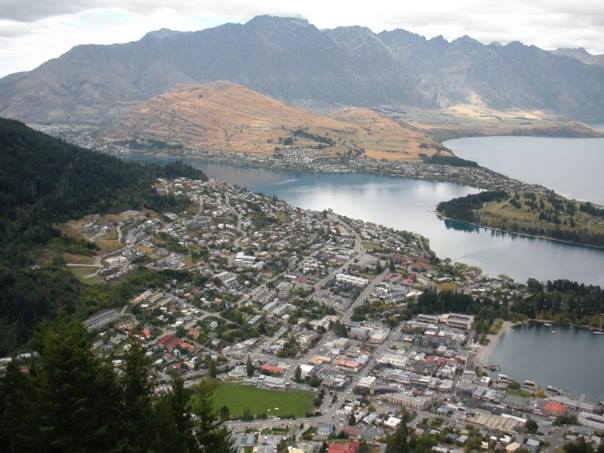 This entry was posted in Uncategorized and tagged hitchhiking, Queenstown. Bookmark the permalink.

1 Response to What it’s like: Hitchhiking in New Zealand